Ann Krinitsky directs the Marin Symphony Youth Performance programs and conducts the Marin Symphony Youth Orchestra as well as the award-winning Virtuoso Program at San Domenico School. With the MSYO, she has performed with at Davies Symphony Hall and the Green Center, recorded annually at Skywalker Studios, and toured internationally to Eastern Europe  in June 2019. Nestled in the hills of Marin County, San Domenico's Virtuoso Program welcomes illustrious guest artists and prepares numerous young string players for major careers as soloists, chamber musicians, and orchestral members.

A frequent guest conductor with the Hawaii Symphony Orchestra, Ms. Krinitsky has led classical and pops concerts on Oahu as well as on tour to the neighbor islands of Hawaii and Kauai. She performed for a crowd of 40,000 at Ala Moana Beach Park as part of the Memorial Day Lantern Floating Ceremony.  She regularly conducts the orchestra for Ballet Hawaii's Nutcracker and has enjoyed numerous collaborations with Chamber Music Hawaii and the Onium Ballet Project. She has also appeared as guest conductor with the Hawaii Performing Arts Festival String Orchestra and the Maui Symphony Orchestra and Chorus.

Graduating with high honors from the University of California, Berkeley, where she studied with Michael Senturia, Ms. Krinitsky completed three summers of study with Harold Farberman and various visiting artists at the Conductors' Institute at Hartt School of Music in Connecticut. In 1993 she was invited to participate in the American Composer-Conductor Program, designed to allow five conductors and five composers exchange knowledge and expertise.

Ms. Krinitsky received the 2000-01 JoAnn Falletta Conducting Award. Given by The Women's Philharmonic and funded by the Stein Foundation for the Arts and Sciences, the award and accompanying prize money recognize women actively pursuing careers as conductors. She has championed the work of numerous emerging and established women composers, serves on the Board of the Women's Philharmonic Advocacy,  and has collaborated with international artists including Midori and Chee Yun Kim.
​
Ms. Krinitsky's experience playing saxophone and jazz piano has kept her well versed in popular as well as classical music. In 1992 she was Musical Director for New Girl in Town, a 1957 Broadway musical presented at the Masquers' Playhouse in Point Richmond. In addition to her conducting duties, she has performed nationally as a violinist and is a published music transcriber, arranger and copyist. She serves as guest conductor, clinician, and adjudicator at various festivals and competitions. She is married to conductor and timpanist Stuart Chafetz.
​

Marin Symphony's 2013 Family Concert featured an original script and the music of Hector Berlioz as well as viola soloist Alexandra Simpson, San Domenico alumna and identical twin of the heroine of the award-winning animated feature, Brave. 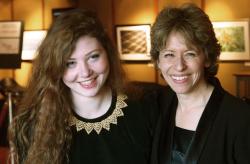 San Domenico's Orchestra da Camera presented annual concerts introducing audiences to the music of Bacewicz, Bond, Chen, Gallagher, Lane, Tann, and Zwilich, among others, and was recognized with a grant from the New York Women Composers in 2014.

The various instruments and artistic disciplines I've studied -- piano, violin, saxophone, ballet, calligraphy, graphic design, jazz, arranging -- have together led to a rewarding career as an orchestral conductor.  Helping a group of musicians achieve more together than they can separately is a unparalleled thrill and a tremendous privilege.